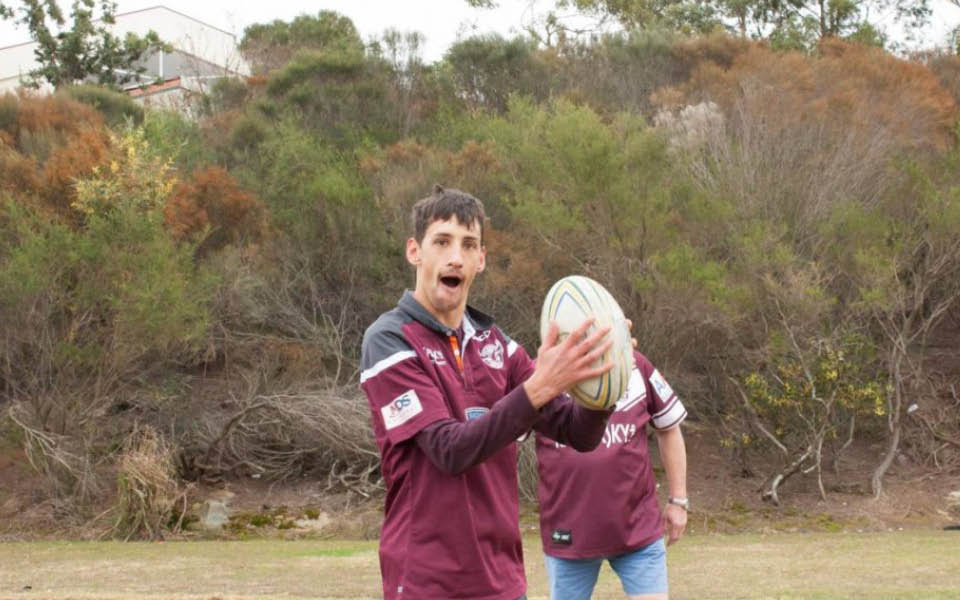 Sunnyfield Enterprises Supported Employee, Kyle, is a remarkable talent on the rugby field. The 24-year-old plays in the NSW Physical Disability Rugby League for the Manly Sea Eagles team.

“As soon as Kyle heard about the league, he joined up right away,” says his Mum, Natalie.

“He’d never played rugby before but in three years he’s come on in the sport fantastically and been named the player of the year for two years in a row.”

“The league is very inclusive and players have a wide range of disabilities. They play a mix of touch and tackle, to adapt to the different skill levels. There are a couple of guys that are pretty good like Kyle and they can play hard.”

“He’s probably faster and plays better than all of them!” says Natalie.

“It’s been really good for him and he has made lots of good friends. Next year he might try out for the all-ages teams.”

Determination has been the key to Kyle’s sporting success. “When Kyle was first diagnosed with cerebral palsy when he was 14 months old they said, ‘he’s not going to be able to do anything,’” says Natalie.

“But we’ve always involved him in sport and clubs have welcomed him to play. He’s so tenacious. He just never gives up. He played cricket and he couldn’t hit the ball or bowl but he just persevered and now he’s great at it.”

“With the rugby season in full swing, Kyle is hoping to lead his team to victory and beyond. “The league are trying to grow the sport,” says Natalie.

“New Zealand, England and France have teams so a World Cup tour is the goal! That would be awesome.”